Introducing a Safer and Better Way for Rail Brakes to Work
Are your Rail Brakes producing the correct force on the rail? Be sure with our self adjusting rail brakes.

Our new rail brake solves this problem by permitting a large rail deviation while providing uniform capacity over the full range of movement.  Conventional spring set rail brake spring life is also shortened significantly by increased rail brake stroke.  That is why their operating range is typically limited.

It is very important to note that BRELX new rail brake, unlike thruster rail brakes or wheel chocks, is completely spring set.  That means that the forces applied to the rail are supplied, full force, by the springs.  This is NOT a self-actuating device, so the crane can be moved at any time in any direction without jockeying the crane to gain release.

This new rail brake works by using a patent pending, simple and very reliable mechanism to first adjust the rail brake to existing shoe-to-rail clearances; then apply the full load.  This action happens naturally as brake pressure reduces on brake setting command.  There are no extra hydraulic valves involved in the action.

Some of the notable features of the new Model RB-SA Series of Self Adjusting Rail Brakes are as follows: 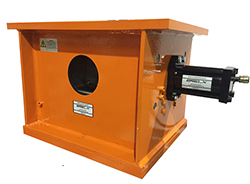 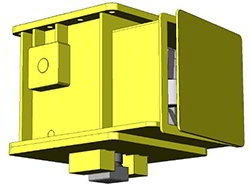 Our knowledgeable support team is readily available to assist you with selection of our reliable Storm Brake products and services for new and used applications. We are commited to providing the best start-to-finish assistance for new and existing customers and to advise on product solutions. Our qualified Service Technicians are available for quick service and support.